Nowruz is the first day of the Persian New Year, also the first day of spring (the day of Vernal Equinox) which is celebrated by around 600 million people in Iran and other extended areas such as central Asia and ancient Great Persian Empires. It is on March, 20th, 2020 at 03:49 am London time in this year. Nowruz is a Persian name for the Persian New Year and consists of two words, Now by means of new and Ruz by means of day.

It is deeply rooted in one of the oldest religion practiced in the Great Persian Empires named Zoroastrianism or Mazdayasna.

Persian year is based on one of the most accurate calendars system in the world named Solar Hijri calendar which is consisted of 12 months, start with spring (The symbol of the earth’s rebirth) and end with winter. There is a leap year every 4 years which one day would be added to the last month of the year. The Persian calendar was invented and fixed by the Persian famous astronomer, Omar Khayyam, based on the Earth’s movement around the sun.

Some people tend to make a plan to have trip, some  visit their families and friends and which elders will give presents to the younger as (Eydi) and they eat and have fun together during the holidays. 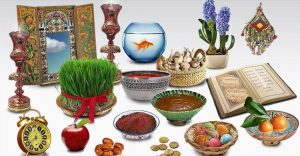 Setting Haft-Sin table is one of the most important parts of being prepared for the New Year which needs to be consisted of 7 items that their names start with Persian letter (S) pronounced (seen) in Persian language. The items on the Haft-Sin table are:

Furthermore, there are other important things which need to be on the Haft-Sin table like:

The last Tuesday night of the year is called (Charshanbeh Suri), the festival of fire. Actually it is the night before the last Wednesday of the year. Charshanbeh in Persian equivalent is Wednesday and Suri is Festival. Everyone makes bonfire outdoors and jumps over it in order to get rid of bad luck and misfortune and singing (sorxiye to az man, zardiye man az to), literally meaning (let your ruddiness be mine, my paleness yours) there is also having local dance around the fire.

The ending of the New Year’s holiday is 13th day of the first month of the New Year called (Sizdah bedar). It is known as the Persian day of environment too. People do not stay at home and everyone spend all the day outdoors in parks, deserts, gardens, near the river or sea and fields till night. 13 is a symbol of bad luck and unfortunate events if you stay at home. Young girls tie grass in the nature to find true love.

5 reasons to use Peyk for your deliveries

How technology changed the parcel delivery?